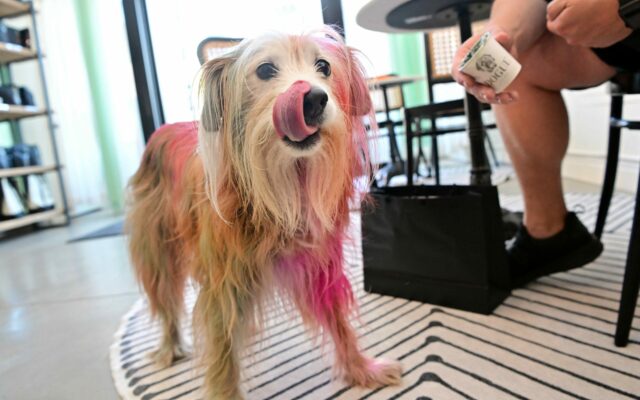 Owner Joey Lake feeds MJ, a terrier mix, a dogguccino made with grass-fed pasture-raised cream infused with coconut charcoal and organic spirulina and topped with a coconut shortcrust cookie, at Dogue, a restaurant for dogs in San Francisco, California on October 5, 2022. - Does your dog like fine dining? Does your pooch like posh nosh? Then one US eatery has just the thing. At Dogue in San Francisco, four-legged friends have their pick of the very best foods available, with a menu designed to please even the most exacting canine palate. (Photo by JOSH EDELSON / AFP) (Photo by JOSH EDELSON/AFP via Getty Images)

America’s first GOURMET restaurant for dogs just opened in San Francisco.  The name of it is the French word for “mastiff” . . . it’s called “Dogue“.  (It’s pronounced like “dog”, but if a snooty French person said it.)

It opened on September 25th and ONLY serves dog food, but not normal dog food.  The founder is a classically trained French chef.

He and his wife opened a doggy daycare in 2015 and started selling their clients homemade dog food he cooked up.  So that’s how the idea got started.

All of the restaurant’s food is human-grade.  During the week, it operates as a “PAWtisserie” that sells small-but-elaborate pastry treats for dogs that start at $5 each.  They also sell “Dogguccinos”.

On Sundays, they do a three-course tasting menu for $75.  It includes things like green-lipped mussels with wheatgrass . . . and raw filet mignon with fermented cabbage and a quail egg on top.

(Here are more examples of the food they offer.)