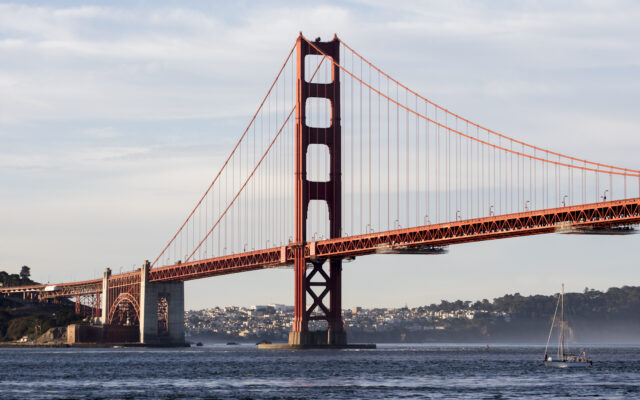 The Golden Gate Bridge is see from the R/V Fulmar vessel while on an Applied California Current Ecosystem Studies cruise in the Greater Farallones National Marine Sanctuary off the coast of San Francisco, Calif. Wednesday, September 25, 2019. (Photo By Jessica Christian/The San Francisco Chronicle via Getty Images)

Its time for Fun Fact Friday! Did you know the bridge’s orange color was originally intended as just primer? According to History’s website,  “The U.S. Navy had lobbied that the bridge be painted in blue and yellow stripes to increase its visibility. But when the steel arrived in San Francisco painted in a burnt red hue as primer, the consulting architect decided the color was both highly visible—and more pleasing to the eye. The bridge’s color is officially called international orange.” You can find more fun facts about the bridge below!