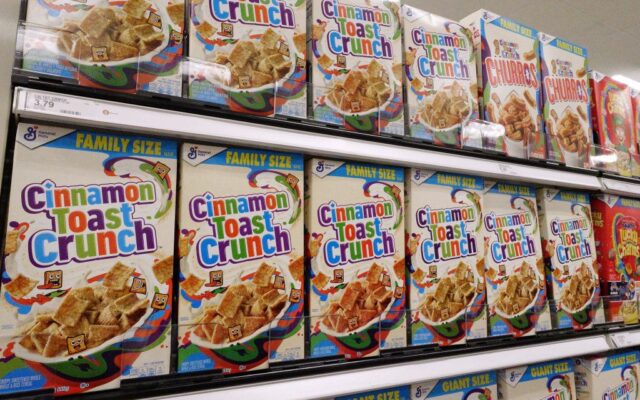 General Mills' Cinnamon Toast Crunch 18.8-ounce boxes are on display on a supermarket shelf on October 15, 2021, in Arlington, Virginia. - More air in that bag of chips? Fewer flakes in your cereal box? You're not imagining it: "Shrinkflation," a tactic used by industry to hide price increases, is back in vogue. Facing the post-pandemic inflationary surge, partly fueled by bottlenecks in global supply and trouble finding workers, companies are under more pressure to deal with rising costs. Consumer advocate Edgar Dworsky, who has followed the phenomenon he calls downsizing for quarter of a century, says he has identified dozens of products in recent months that have seen sneaky price increases. He found goods ranging from Charmin toilet paper rolls to Cheerios cereal, to Royal Canin canned cat food, where the size or weight has shrunk, but the price remains the same. (Photo by Olivier DOULIERY / AFP) (Photo by OLIVIER DOULIERY/AFP via Getty Images)

According to ChewBoom, the toys will appear in Cinnamon Toast Crunch, Lucky Charms, Trix, Honey Nut Cheerios, Cocoa Puffs and Cookie Crisp and will be focused on the 90s.

Toys up for grabs this year include:

One of General Mills’ most popular characters from the 90s, Wendell the Baker, will also be available in a limited number of boxes.

Cereal fans can collect all of this year’s toys nationwide beginning this month. What’s the best cereal box toy you ever got?