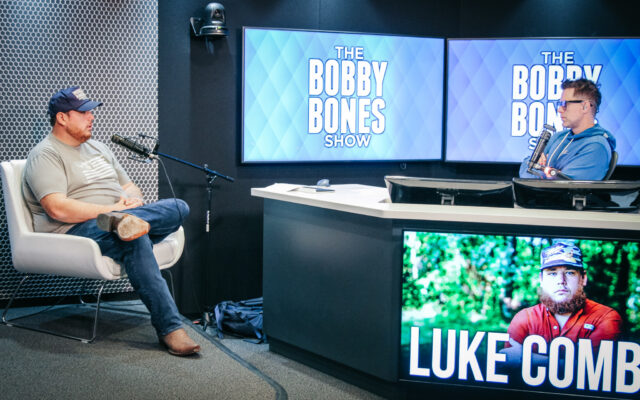 Luke Combs is a new dad and he just released his album Growin’ Up. He stopped by The Bobby Bones Show a few weeks ago, before his wife gave birth to their baby boy. He pre-recorded this interview to get a chance to talk about the new record on album release day.

When it comes to new music, Combs has a special bond with his fans. He trusts them to share their opinions on whatever he puts out.

While he doesn’t let it drive the decision making process or the songwriting, he does appreciate the consistent honesty. Adding that his fans and his team could really love his project Growin’ Up, but it’s really hard for him to believe it. He thinks that’s the curse of being a creative person, because your mind is constantly overactive. On the project is the song “Call Me,” which Combs wrote in 2017.

During this recording session, it was the last day and the last hour when he decided on a whim to record it. They had finished everything they wanted to get done, and Combs decided to spend the last hour recording this song. Also on the record is “Going Going Gone,” and “Middle of Somewhere” which were both songs Combs says fell out of him, they were the easiest for him to write. Speaking of writing, Combs admitted he never gauges a song based on how he feels about it after the writing session, he always waits to see how he feels about it the following day. Though he will always finish writing a song to competition even if he doesn’t like it.

Overall, Combs feels different about this album more than his previous projects. All of the recording sessions for this project were so spread out and different due to the pandemic and circumstances of the world. Then his tour came along, and he stopped working on the album altogether. The album took over 4 years to make, but he feels really happy with the way it all turned out.