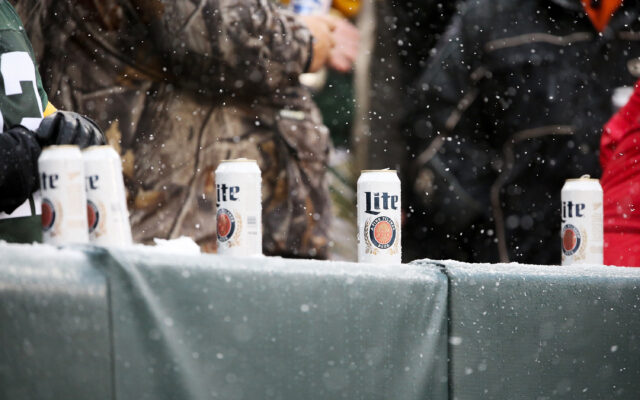 GREEN BAY, WI - DECEMBER 04: Cans of beer sit in the stands during the game between the Green Bay Packers and the Houston Texans at Lambeau Field on December 4, 2016 in Green Bay, Wisconsin. (Photo by Dylan Buell/Getty Images) *** Local Caption ***

It’ll be easier than ever to get hammered this holiday and faceplant into your Christmas tree while your family laughs at you . . . Miller Lite just unveiled something called a “Tree Keg Stand” that turns your Christmas tree into a beer-serving station.  (Here’s a photo.)

It’s basically just a metal table you can fit a keg and ice bucket under.  It’s got holes in the top, so you can feed the tap through and clip it to a branch.

The top is about three feet off the ground, and the tree sits on it.  So it’s not like a normal stand.  But they say it can hold trees up to five feet tall and 150 pounds.

Each one will cost $50 at TreeKegStand.com.  They go on sale at 10:00 a.m. Eastern next Thursday.  If you want one, set a reminder and hope you get lucky.  It sounds like there’s a very limited supply.

They’re also selling “Beernaments” again this year . . . oversized ornaments you can slip a beer can into and drink out of.  Their website says to check back at 10:00 a.m. Eastern next Tuesday for those.  (Here’s a photo.)  (Food & Wine)