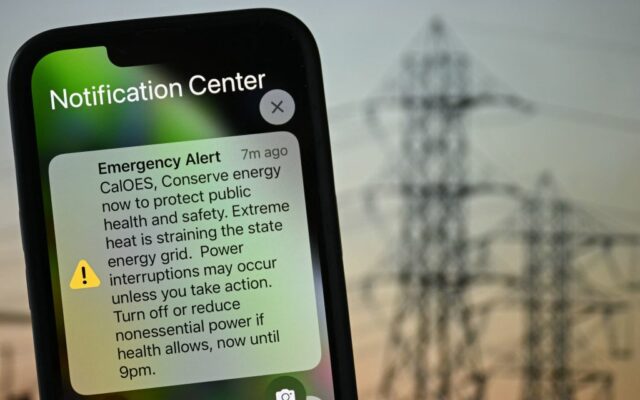 A photo illustration shows a background of electric power infrastructure with an Apple iPhone showing an Emergency Alert notification from CalOES urging the public to conserve energy to protect health and safety as the electricity grid is strained during a heat wave in Los Angeles, California on September 6, 2022. (Photo by Patrick T. FALLON / AFP) (Photo by PATRICK T. FALLON/AFP via Getty Images)

As the heatwave continues throughout the Bay Area, it appears as PG&E and the state’s power grid operator are encouraging people on Wednesday to again reduce their energy use to avoid the possibility of rotating power outages.

According to NBC Bay Area, The California Independent System Operator, which manages electricity over the state’s high-voltage transmission lines, narrowly avoided having to institute the rolling blackouts Tuesday when the state saw an all-time record high power grid peak demand of 52,061 megawatts.

The grid operator encourages people to take steps like setting their home or business thermostats to 78 degrees or higher during that time, as well as to avoid the use of major appliances and to turn off any unnecessary lights.