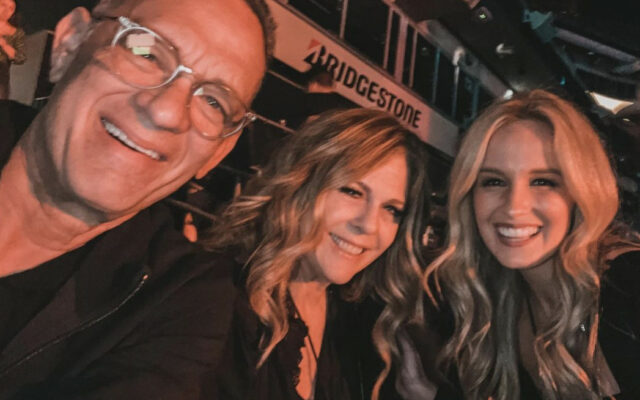 Morgan with Tom Hanks and Rita Wilson at CMA Fest!

Morgan worked at CMA Fest this past weekend and while she was there she met Tom Hanks and Rita Wilson!

She explained how it all went down. She did stage announcements at Nissan Stadium Thursday night and after she wrapped, she joined her parents at their seats in the stadium. During Jason Aldean’s set, she decided to go to the restroom. While walking up the stairs, she swore she saw Rita sitting in the seats without anyone around her besides one guy. While in the restroom she realized that if it was her and that Hanks was likely the one sitting next to her. On her walk back down the stairs, she slyly went into the row in front of them and turned around to see that she was right. It was indeed Tom Hanks and Rita Wilson just sitting there in the crowd.

She told them that she was Morgan from The Bobby Bones Show and everyone on the show loves them. Morgan admitted that Hanks likely didn’t hear her very well because Jason Aldean was currently on stage performing and it was incredibly loud. She thinks Wilson knew what she was saying because she recognized the “Bobby Bones” name. Then Morgan asked them to take a photo with her, and that’s when Hanks took her phone and snapped a selfie of them in the stands. Morgan said that it was such a cool experience because they were sitting in the stands like normal people and there was no one around them or with them.

Which celebrities have you grabbed a selfie with?