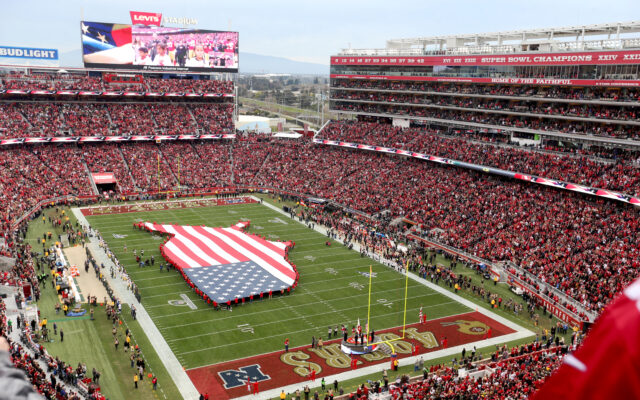 SANTA CLARA, CA - JANUARY 19: A U.S. flag forms the United States of America as the national anthem is played before the start of the NFC Championship game between the San Francisco 49ers and the Green Bay Packers at Levi's Stadium in Santa Clara, Calif., on Sunday, Jan. 19, 2020. (Ray Chavez/MediaNews Group/The Mercury News via Getty Images)

Regardless of where you watch the game, there’s one universal truth:  Beer is EXPENSIVE at the stadium.  The site Bookies.com put out a report on the price of a beer in every city, ranking them from the most to least expensive.

All those teams pay more than $11 for one beer.

The Cincinnati Bengals are the only other team with beers under seven bucks.

Of course, there are more stadium costs than beer.  There’s also the price of tickets, parking, food, and non-alcoholic beverages.

If you take everything into account, the 49ers are the most expensive team . . . going to a 49ers game in the Bay Area averages out to over $1,000 for two adults and two kids.  The Tampa Bay Buccaneers are the second-most expensive.