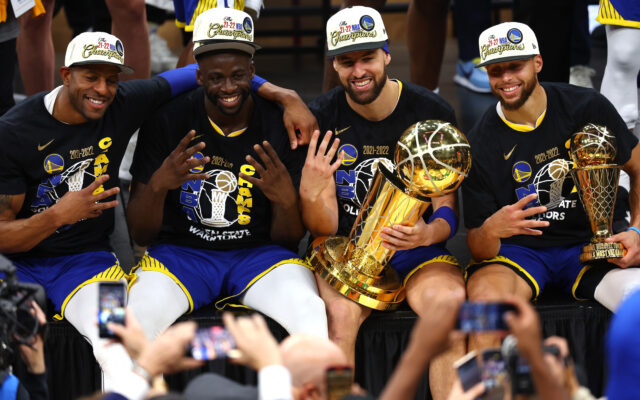 BOSTON, MASSACHUSETTS - JUNE 16: Andre Iguodala #9, Draymond Green #23, Klay Thompson #11 and Stephen Curry #30 of the Golden State Warriors pose for a photo after defeating the Boston Celtics 103-90 in Game Six of the 2022 NBA Finals at TD Garden on June 16, 2022 in Boston, Massachusetts. NOTE TO USER: User expressly acknowledges and agrees that, by downloading and/or using this photograph, User is consenting to the terms and conditions of the Getty Images License Agreement. (Photo by Adam Glanzman/Getty Images)

Dub Nation Baby Let’s Go!!!! The Golden State Warriors defeated the Boston Celtics in game 6 of the NBA Final with a score of 103-90 to secure the title. This is Golden State’s 4th Championship win in 8 years. Congrats Warriors! Who is going to the parade?